Rinpoche Joins in Commemorating the 10th Anniversary of 9/11

Exactly one decade later, the tragedy of September 11, 2001, was commemorated with an Interfaith Vigil at 8:30 am in the Washington Hebrew Center, not far from the Pentagon where one of the 3 attacks took place. The event was entitled the “Call To Compassion”. 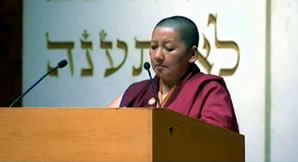 By invitation from the Washington National Cathedral, HE Jetsün Khandro Rinpoche joined with other religious leaders of diverse faiths to reflect on the events of that day. Rinpoche read the Parable of the Saw from Majjhima Nikaya, 1.129 in the Pali Canon and offered her reflection on the parable, which included references to the basic Buddhist tenets, the Four Immeasurables.

When you take refuge, you are taking refuge from samsara and the habitual ways of surrendering to samsara.