The Sangha of Mindrolling Mourns the Passing of Kyabje Trulshik Rinpoche 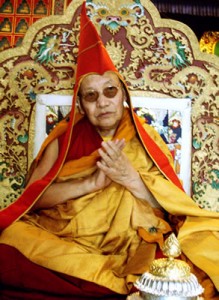 With our hearts filled with devotion, we are deeply saddened to announce that the Crown Jewel of the Nyingma School, the precious, sublime Guru with incomparable kindness, Kyabje Trulshik Chökyi Lodrö Rinpoche withdrew his consciousness into the expanse of dharmata, passing into parinirvana on 2nd September, 2011.

One of the most venerated and revered masters in the Tibetan Buddhist tradition, head of the Nyingma School and holder of numerous lineages, Kyabje Trulshik Rinpoche had extremely close ties with Mindrolling. Kyabje Rinpoche was a tulku within the Mindrolling lineage and studied at the Mindrolling Shedra in Tibet and received his gelong vows (full ordination) from the unsurpassed master, Minling Chung Ngawang Chödar Rinpoche who was his main teacher at Mindrolling. He also studied with 34 different teachers including the Dordzin of Mindrolling, the great Dechen Chödzin. Kyabje Trulshig Rinpoche was renowned throughout the Buddhist world for his great learning, accomplishment, wisdom and compassion as well as the most perfect holder of the vinaya vows and teachings. People from all over the world aspiring and longing for the sublime vinaya flocked to Kyabje Rinpoche who kindly bestowed the vinaya vows to over 10,000 monastics in his lifetime.

Kyabje Trulshik Rinpoche was one of the most beloved and senior most masters within the Mindrolling tradition. In 2007, Kyabje Rinpoche travelled to Mindrolling India at the request of Jetsün Khandro Rinpoche and tirelessly, with peerless loving kindness bestowed the entire Mindrolling lineage empowerments and transmissions to the sangha of Mindrolling, ensuring the preservation and spread of these precious, unexcelled teachings into the next generation.

The Mindrolling Monastery, Samten Tse Retreat Centre and Lotus Garden along with the worldwide Mindrolling sangha will be spending these days following Kyabje Trulshik Rinpoche’s parinirvana in prayers and offerings. We urge everyone connected to Mindrolling to join us in supplications and offerings to the Noble, Supreme Guru.