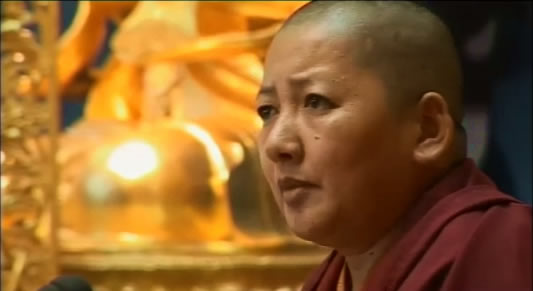 Her Eminence Mindrolling Jetsün Khandro Rinpoche was born as the eldest daughter of Kyabje Mindrolling Trichen Gyurme Künzang Wangyal, the 11th throne holder of the renowned Mindrolling lineage, one of the six main Nyingma lineages of Tibetan Buddhism. Throughout its history, some of the greatest masters of their time have been born within the Mindrolling lineage including the unique lineage of female masters known as the Jetsünma line, a remarkable Mindrolling tradition. 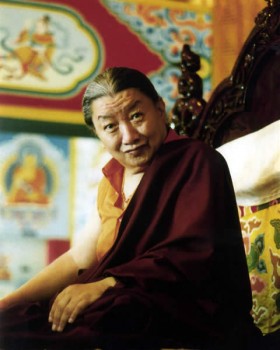 A Tradition of Great Female Masters

Mindrolling Jetsün Khandro Rinpoche was recognized by His Holiness the 16th Gyalwang Karmapa as the reincarnation of the great Dakini of Tshurphu, Khandro Orgyen Tsomo, the consort of the 15th Karmapa, and a respected and revered female master who spent most of her life in retreat. Thus, Jetsün Khandro Rinpoche, as a Jetsünma within the Mindrolling lineage and a tulku within the Kagyu lineage holds both the Nyingma and Kagyu lineages. 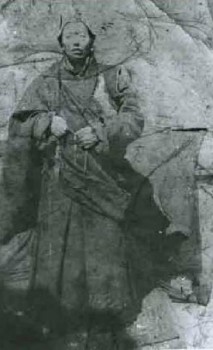 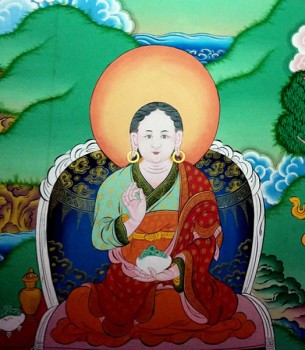 The Jetsünmas, daughters of various Mindrolling Trichens over the generations, have been some of the greatest and most inspirational figures in the history of Tibetan Buddhism. Beginning with Jetsün Mingyur Paldrön (1699-1769), the daughter of Chögyal Terdag Lingpa (founder of Mindrolling), down to Jetsün Khandro Rinpoche, the daughter of the 11th Mindrolling Trichen, Mindrolling has maintained an extraordinary tradition of female teachers. In December 2012, the 13th generation of Jetsünmas began with the birth of Rinpoche’s niece, Mindrolling Jetsün Gautami Thrinley Choedron, born to Jetsün Dechen Paldrön and Kunda Britton Bosarge la.

For the past two decades, Jetsün Khandro Rinpoche has been teaching in Europe, North America, and Asia. Rinpoche is actively involved with the Mindrolling Monastery in India and in 1993, Rinpoche established the Samten Tse Retreat Centre in Mussoorie, India, as a branch of Mindrolling Monastery, a place of study and retreat for both nuns and Western lay practitioners. The North American Seat of Mindrolling International, Mindrolling Lotus Garden Retreat Centre was established by Rinpoche in 2003 in Stanley, VA, USA, and Rinpoche’s land centre, Rigdzin Gatsal, located in Greece is currently under construction.

Preservation of the Dharma

The Dharmashri Foundation, committed to the preservation of the most precious teachings of Tibet’s Nyingma school and particularly the Mindrolling lineage was founded by Jetsün Khandro Rinpoche along with her sister, Jetsün Dechen Paldrön in 1993. The Dharmashri Foundation is many faceted, tasked with numerous activities including archiving, translating, recording and distributing thousands of texts and teachings. Its main headquarters is located at Mindrolling Lotus Garden and it maintains branches and is active in more than 10 countries and languages. 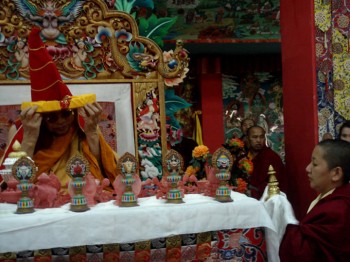 Jetsün Khandro Rinpoche making an offering to Kyabje Taklung Tsetrul Rinpoche during the Rinchen Terdzö empowerments at Mindrolling Monastery in 2009.

As president of Samten Tse Charitable Projects and Mindrolling International, Rinpoche heads numerous charitable projects. These organizations are a continuation of the instructions and vision of Rinpoche’s root guru and father, Kyabje Mindrolling Trichen who felt it was crucial for practitioners to understand the immense importance of engaging in actions of merit and virtue and not simply adopt an intellectual approach to the dharma.  Samten Tse Charitable Society, through four specific Projects, Vajra Vidyadhara, Shri Dharma Sagara, Shri Dipam and Ayujnana work to improve the living conditions of populations based in India, Tibet and other Himalayan regions. They also support the growth and flourishing of the buddhadharma through numerous programs including sponsoring of empowerments for thousands of fortunate practitioners around the world.

The activities of the Samten Tse Charitable Society (STCS) and Mindrolling Charitable Society (in the US) are based on these ideals and are therefore intended not only as a means of benefiting those who receive help in various forms but also of providing an even greater foundation of merit for those who are able to practice the paramita of generosity by contributing to the various projects.

What is the essence of vows? Irreversible confidence.