“Milarepa’s fame came from no other reason than his sincerity and honesty in looking at the truth, even the bitter truth, and transforming that into a universal truth, the truth of all beings, the ultimate truth.” -Khandro Rinpoche 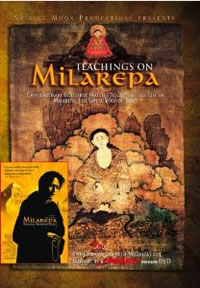 
Purchase from Amazon and many other merchants.

Trailer for ‘Teachings on Milarepa’

Everyone is like a blind-folded person trying to find their way. It is our refusal to take the blindfold off that is the problem.