Vajrayogini Temple Group-It was just getting light when the group arrived at Paro Chimphu, the Vajra Varahi sacred site to undertake the most strenuous hike of the pilgrimage. Along the trail there were many wondrous signs such as hand-prints and footprints in the rock left by Padmasambhava, Yeshe Tsogyal and other great bodhisattvas. After the final steep ascent, the group finally reached the temple of Vajrayogini [Dorje Phagmo]. At this temple, it is said that Vajrayogini arose and entered the statue that still stands. It is known as the Statue Which Floats in the Air and does not touch either floor or ceiling. There was time for individuals sessions of practice of the Vajrayogini liturgy before descending.

Paro Sites Group-A small group of those unable to make the climb, made an excursion to Dungtse Lhakhang, built in the 1433 by Thangthong Gyelpo—the famous the famous bridge builder. In the very intimate shrine, group members immersed themselves in the floor-to-ceiling high 14th century frescos depicting the pantheon of Vajrayana Buddhism. They were illuminated only by a small window and the light of a mobile phone. A big prayer wheel in the front of the lhakhang and many small prayer wheels lining the outer walls of the lhakhang, were turned constantly by townspeople who visited the site to do prayers, circumambulate the shrine or to place tsa-tsas. Following this wonderful visit, The group drove on to the National Museum of Bhutan where members spent time in the various galleries which presented a breath-taking array of traditional masks, tangkhas and rupas—all carefully described from the perspective of dharma.

Click on the first thumbnail to begin the slideshow 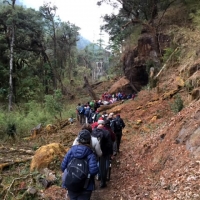 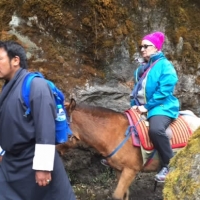 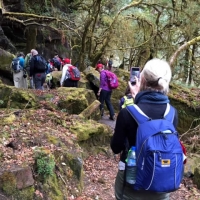 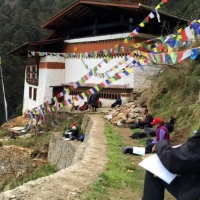 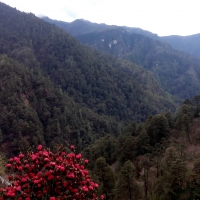 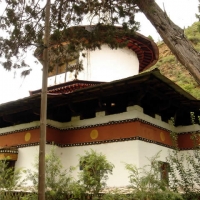 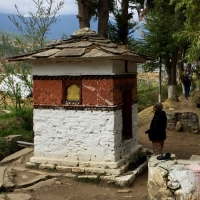 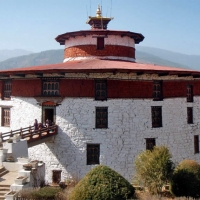 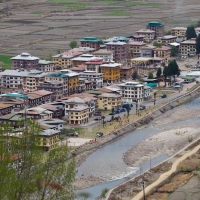