Rinpoche Honored for 20 Years of Teaching in France 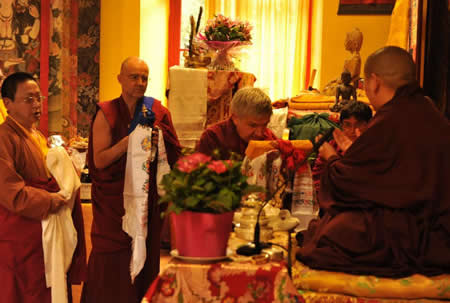 In May, HE Jetsün Khandro Rinpoche bestowed teachings on the Ati Zabdon at Vajradhara Ling, France. The French sangha performed a Vajrasattva Feast during which they offered Rinpoche a silver mandala to mark the 20th Anniversary of her teaching in France. Ven. Lama Namgyal la composed the following verses for the occasion:

In the meadows of Vajradhara,
Far in north-western Europe,
Joyful students with courage
And gratitude gathered harmoniously
To drink the most exquisite amrita
Of great perfection and mahamudra,
On an auspicious dakini’s day,
The sky hailed white flowers.

Pristine awareness, unyielding moonlight,
Source of accomplishments,
May your unimpeded presence
Leap over oceans for eons to come!

May your students swiftly spread their
Garuda wings to fly in lotus gardens!
May your life be happy and healthy!

Offered by Lama Namgyal
Aubry-le-Panthou
May 16, 2012
Thank you to Elizabeth Ready for sending the these verses along so we might share them with the worldwide sangha.