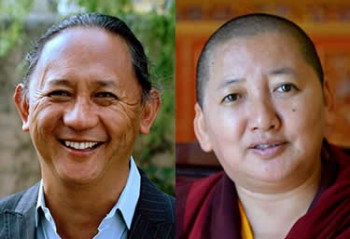 Dzigar Kongtrul Rinpoche and Mindrolling Jetsün Khandro Rinpoche will return to teach at the 2014 Shedra Program to be held from July 24 through August 3rd.

His Eminence Dzigar Kongtrul Rinpoche will bestow teachings on the Uttaratantra, the peerless commentary on the Buddha’s third turning of the wheel of Dharma, which illuminates the all-pervasive Buddha Nature that is our enlightened essence. Jetsün Khandro Rinpoche will bestow teachings on the vajrayana samaya vows, the completion of the three categories of Buddhist discipline.

Both courses presented by these two great masters enable dedicated students to further their studies of Buddhadharma in the traditional format of Shedra, a Buddhist philosophical college for higher education.

Supplementary courses in the History of Buddhism, The Art of Tibetan Medicine and Kyudo will also be offered.